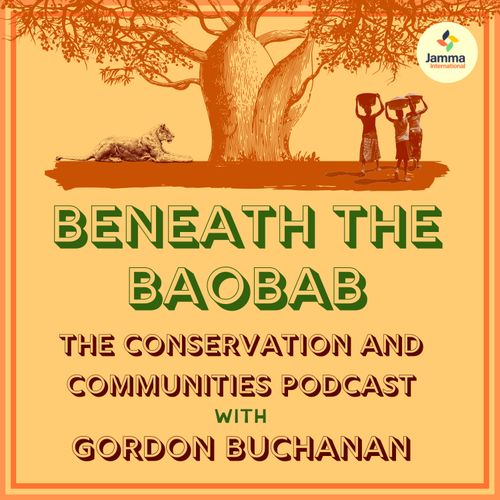 Beneath the Baobab, the Conservation and Communities Podcast with Gordon Buchanan.

Right now, up to 1 eighth of the world’s species are at risk of extinction and its down to us to act now, or lose them forever.

In Beneath the Baobab from Jamma International, wildlife filmmaker Gordon Buchanan hosts cutting-edge conversations about conservation work led by communities around the world.

Gordon hears from people living and working alongside wildlife; from elephants to lions, rhinos, wild dogs and endangered plants. In every episode Gordon hears from a unique project that’s seen marginalised community voices brought to the forefront of conservation, with inspiring and empowering stories to tell.

The global conservation movement has never been more urgent in the face of climate change and mass extinction. But there is still much to be learned, and finally the voices, insights and experiences of indigenous peoples are being heard on the international stage.

The places where wildlife and humans touch are not idealistic, harmonious locations, but often have raw edges, blurred boundaries and are fraught with conflict and competition. Furthermore, the external pressures imposed to protect wildlife don’t always support the people whose shoulders this change rests upon.

That’s why we’re looking at examples and hearing from people working and living directly with and within those communities.

In this series learn about Community Based Natural Resources Management, hear from indigenous peoples who are exercising their rights to do innovative work as custodians of resources for generations, then find out how they’ve developed work schemes, governance and management systems that allow them to place a high value on wildlife and build the economic case for conservation.

The future for wildlife and endangered species can be positive, if we are all prepared to listen. Join Gordon and his guests Beneath the Baobab for stories of hope as well as brilliant, radical and innovative ideas for solving the problems faced by humans and wildlife.